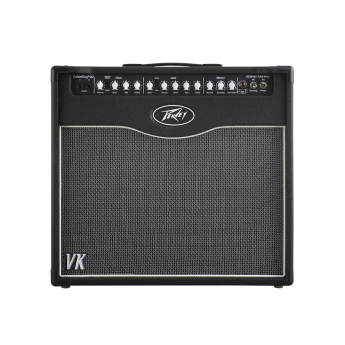 In addition to all the boutique qualities and hot-rodded tones that guitarists have come to expect from the ValveKing series, the new generation line incorporates brand new cutting-edge features for recording and performing musicians. For the recording musician, the ValveKing features a USB-direct recording output, which pipes the miked amp vibe directly into a computer. On the rear panel, the built-in Peavey MSDI (Microphone Simulated Direct Interface) XLR direct interface eliminates the need for miking by allowing users to send the amp's signal directly to a recording device or mixing console.With versatile tone for rock, jazz, or metal, the new generation ValveKings have the capabilities to create almost any sound imaginable. ValveKing's proprietary Vari-ClassTM knob enables guitarists to adjust the ValveKing's "class" characteristics, allowing for complete power amp type versatility. True to its name, ValveKing even includes the new TSITM tube-monitoring indicator that keeps you apprised of the health of your tubes.ValveKing offers other high-end features, including variable power control, so you can tailor your output to your performance situation without compromising tone. With triple 12AX7s, two independent foot-switchable channels each with their own EQ, and the Vari-Class variable Class A/AB simulation control, the next generation ValveKing delivers massive amounts of completely customizable all-tube power.
We can help via Live Chat, Email or you can call us 1-888-840-0464